My weekend in Massachusetts

I have just returned from a short trip to western Massachusetts. It was a very full and busy few days. I was happy to be in my old studio again, to see all my books and papers stored there. I even made a few small pieces of abstract art, in between the excitement of scheduled events.

I attended the beautiful wedding of the daughter of dear friends, which was held at The Eric Carle Museum of Picture Book Art. Here I am with the bride and groom and a young friend. 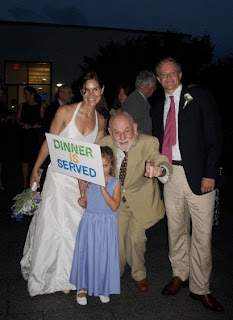 The next day, I went back to the Museum for the book signing, which was attended by more than 500 visitors and museum members some of whom traveled quite a distance to be there. It was great to be at the Museum again (I am impressed by the main hall every time I walk inside), to see old and new friends and to be welcomed by such a kind and patient crowd.

Here I am signing books: 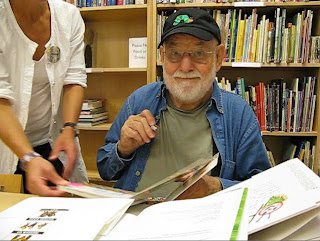 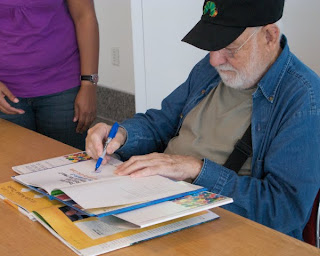 And here I am after the signing with Stacy Gabrielle from Crayola, and Alix Kennedy, Director of The Eric Carle Museum of Picture Book Art. I was very honored to receive a giant Crayola crayon in my new favorite color: "The Very Hungry Caterpillar" green. The only other special crayon color of this kind that Crayola has created was for Oprah! And it was the color purple! 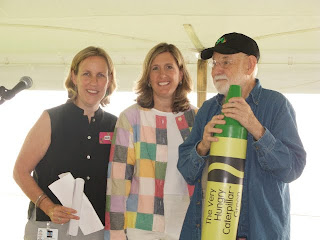 And this is me in The Very Hungry Caterpillar seat that was sent to the Museum by my German publisher Gerstenberg Verlag: 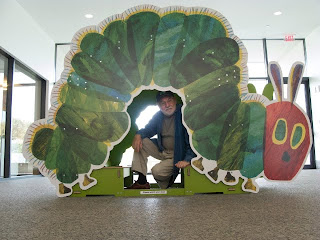 It was a very memorable time, truly a pleasure, and I am glad to be home again with Bobbie surrounded by the hills of North Carolina. 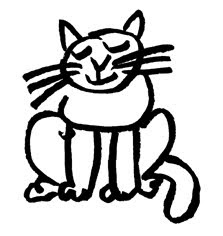 Animals are a constant source of comfort and fascination, the ones in the wild and the ones we live with in our home. I love all kinds of animals but I am especially fond of cats. There are cats and dogs in many of my books. When I lived on my own in New York City, I had two cats named Fifi (black, long-haired) and Mitzi (a tiger cat), who I wrote about in my book Flora and Tiger. My wife, Bobbie and I had a lovely cat named Annie (grey, long-haired) for many years. You may have also noticed a white dog in my stories. Our beloved Tock, a white Samoyed, was the inspiration. (By the way, Tock was named for the dog in the book, The Phantom Tollbooth, written by my friend Norton Juster.) 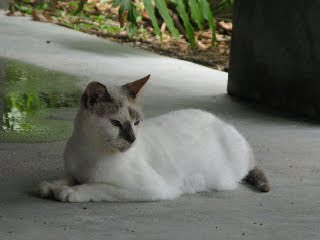 We do not have a pet right now, but when in Florida we are visited regularly by a stray cat, named by the neighbors - Whitey - who we very much enjoyed seeing each day.
Posted by Eric Carle at 10:14 AM 5 comments: 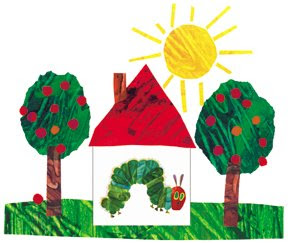 A dream: It is night time. In the distance, between the hills, some stars fall from the sky. They come closer and closer. Finally a star hits me. It does not hurt. Just the opposite. The star takes me by the hand and together we float toward the heavens.

A reality: Later, I created my book "Draw Me A Star" based on this dream.

Another dream that became a reality:

In 1992 my wife and I were invited to Japan by my Japanese publisher in Tokyo. This visit deeply impressed us. Shrines, museums, Kabuki theater and incredible sushi. And we were introduced to a Picture Book Museum. Chihiro Iwasaki (1918-1974) was a leading and beloved picture book artist. She left her work to her son Takeshi Matsumoto. "Is it possible to see Chihiro’s pictures?” Neighbors asked. Takeshi hung his mother's pictures on the wall of his living room. That was the beginning. Then he attached a small museum to the house. Years later, he built a 20,000 square foot stunning museum in Azumino, two hours from Tokyo.

And that was the beginning of our dream, still unconscious, like a seed whose roots invisibly took hold in the soil. In 1995, we seriously and with great enthusiasm began our plans. Seven years later the doors opened to The Eric Carle Museum of Picture Book Art. Seven years just like in fairy tales. This sounds almost euphoric. But we had many doubts and sleepless nights. Are we on the right path? We are without experience. The scale of the undertaking at times seemed overwhelming. But in the end we said yes. And so our dream became a reality.

I am thinking about our dream these days, as I plan my trip to the Museum later this month.
Posted by Eric Carle at 11:14 AM 9 comments: