In an earlier blog post, I shared images of posters I had designed as a young art student in Germany. I thought you might enjoy seeing a few more of these. Here I am at 20 years old when I first started to design posters for Amerika Haus. 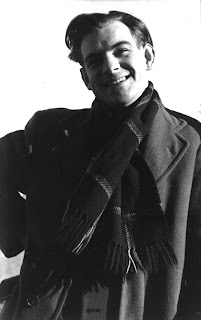 During World War ll, German propaganda depicted the United States as a country of gangsters, chewing gum, skyscrapers and without "Kultur." All countries create propaganda that portrays the enemy in the worst way, some true, some half true and some lies. It would be an interesting lesson to compare WW ll propaganda with the reality of today: former "bad" enemies are now "good" allies, friends and trade partners!

After the war in 1945, the United States Information Service established the Amerika Haus in the larger German cities of the U.S. Zone (Germany had been divided into the U.S., British, French and Soviet Zones). The Amerika Haus, typically centrally located within each city, provided more or less a "look at the USA" and reintroduced the German people after 12 years of Nazi Dictatorship under Hitler (1933-45) to the people and culture of its former enemy. The Amerika Haus countered the negative view of the United States and the free world. It housed a library with books and magazines mostly in English, arranged discussion groups, performed plays, concerts, movies and exhibitions, for instance, a show on architecture from the United States. From time to time, the Amerika Haus arranged joint ventures with German cultural institutes (see below). The concept of the Amerika Haus was ingenious, successful and resonated with the German population eager for more contact with the outside world from which it had been isolated for many years. 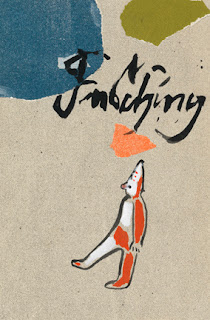 From 1945 to 1949 I studied graphic design at the Akademie der Bildenden Künste (Academy of Applied Arts) in Stuttgart, Germany. I was interested in poster design. FASCHING is a student study I designed for carnival which was a music and theater festival during which regular classes were suspended. 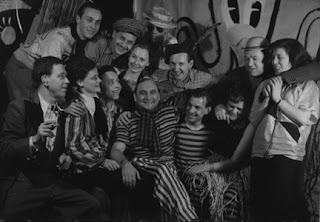 Here I am with a group of fellow art students during carnival.

Mr. William Lovegrove, United States Cultural Attache, inquired at the Akademie whether a young student would be interested in designing posters for the events at the Amerika Haus. And that is how I, at the age of 20, became a poster designer. 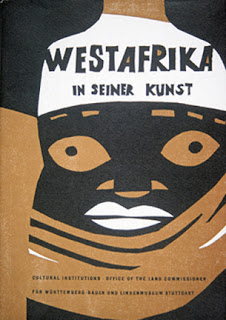 My first design WESTAFRIKA IN SEINER KUNST was for a joint venture between the Amerika Haus and the local Lindenmuseum. I submitted several sketches to Mr. Lovegrove and found him to be very selective and demanding. Finally he agreed to a design which I executed as a large linoleum cut and a commercial printer printed it (very carefully! Linoleum is very soft. Printers at that time usually printed from steel plates) in an edition of 100. This design was also used for a catalog. Soon thereafter, Mr. Lovegrove asked me for another design. Remembering how particular he was, I suggested that I submit 3 sketches from which he had to choose. My professor in art school, Professor Schneidler, had impressed upon me that clients often do not know what they want and have to be told what they need. Later on, I found out that Mr. Lovegrove had studied art at the Sorbonne in Paris!

Mr. Lovegrove responded to my suggestion: "Mr. Carle, with your West Afrika poster you have shown that you are a good designer. From now on you, without my input, select the design." He told me about silk screening, of which I knew nothing and ordered from the United States inks and material necessary to print my posters. From then on, I designed and executed the posters (the total number of which I cannot remember). And when I immigrated to the U.S. in 1952, I only brought a small cardboard suitcase as I needed to be economical in what I packed. There were several more posters. But here are a few that I hope you will enjoy seeing. 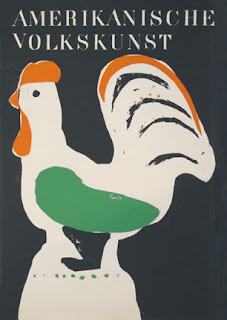 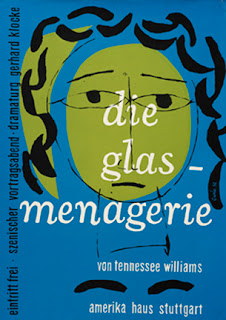 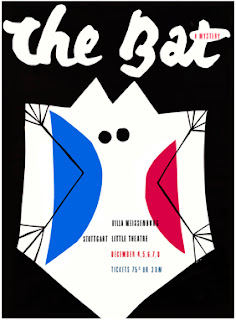 THE BAT a popular Broadway play at the time. Both examples from American writers/poets/playwrights. 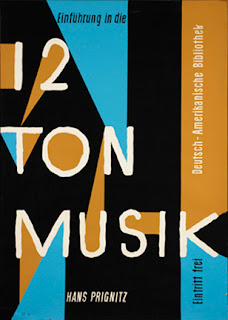 EINFUEHRUNG IN DIE 12 TON MUSIK, INTRODUCTION TO 12 TON MUSIC reintroduced avant-garde music, created by composer Arnold Schönberg who was Jewish, which had been banned in Nazi Germany as "Degenerate Art." 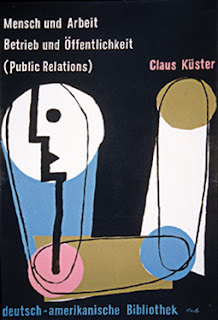 MENSCH UND ARBEIT/ BETRIEB UND OEFFENTLICHKEIT,
MAN AND WORK/ INDUSTRY AND PUBLIC
A lecture on Public Relations which had been an almost unknown concept in Germany, given by a former German prisoner of war who had been in a camp in the U.S. and while there studied this subject. 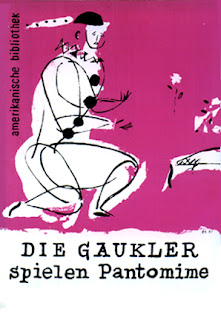 DIE GAUGLER SPIELEN PANTOMIME,
TRAVELING ENTERTAINER PLAY PANTOMIME
A poster for a performance or a play, this poster was awarded "One of the 10 best posters of the year."