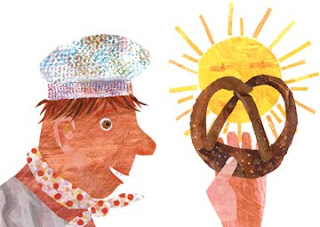 I recently read an article about pretzels in the New York Times that mentions a number of bakeries in New York City where one can buy fresh baked soft pretzels and a wonderful bakery in Northampton, MA called Bakery Normand. I have been a fan of good bread for a long time and I often enjoyed Normand's pretzel rolls among other treats in their shop when I lived in the small city in western Massachusetts. I like all kinds of breads and pastries and have baked some of my own in the past. I even wrote a book about a baker.

The NYT pretzel piece described the style of pretzels that come from the Baden-Württemberg region in Germany where I grew up in this way: "the pretzels are known for their fat 'bellies' and skinny, intertwined arms." My pretzel story, which also includes a little pretzel history, is called Walter the Baker. The story is based on the tale of how the pretzel was invented, which was told to me by my Grandmother when I was a boy. But I truly had an uncle named Walter who was a baker and who baked, along with all kinds of bread, cookies, cakes and rolls; pretzels!
Posted by Eric Carle at 3:43 PM