The Carle Honors is a very special tradition now. It is The Eric Carle Museum of Picture Book Art's annual celebration and award ceremony and this year's was as delightful as ever and very meaningful to the recipients of the awards, the Museum board of directors and staff, Bobbie and myself and all who care about the Museum. This year the Carle Honors were given to Michael Di Capua (Mentor), Jeanne Steig (Angel), Karen Nelson Hoyle (Bridge) and Lois Ehlert (Artist). Here's a photo taken during the award ceremony that captures the beauty of the building where the elegant event was held for the second time, Guastavino's built under the 59th Street bridge in New York City. 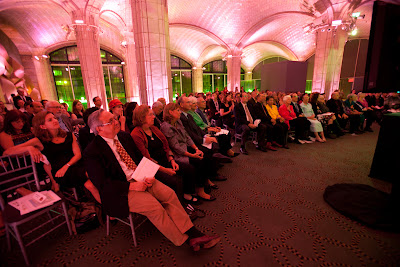 Next year the Museum will be 10 years old and Nancy Schön, who was a Carle Honor recipient in 2010, unveiled her beautiful bronze maquette of The Very Hungry Caterpillar which will be available for sale as part of the Museum's anniversary year. Here I am saying hello to my good friend! 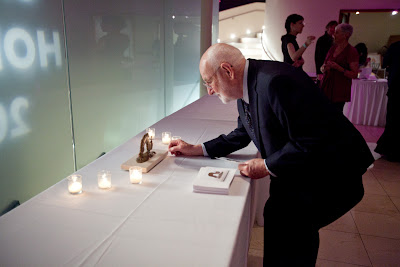 Photos by Johnny Wolf Photography (c) 2011 The Eric Carle Museum of Picture Book Art
Posted by Eric Carle at 11:21 AM